In the field, it is not unusual to encounter fungi with a diverse microbiota on their caps, which sometime includes the green stains of algae. EurekAlert reported this week on an article published in Nano Letters. The authors used white button mushrooms (Agaricus bisporus) as a cyanobacteria-friendly substrate for bioelectricity generation. The cyanobacteria had previously been evaluated for electricity generation, but one major limitation the researchers encountered concerned the ability for the cyanobacteria to live on the substrates necessary for electricity conduction. The researchers turned to biological substrates with the hypothesis that the surface of a button mushroom would be more favorable to cyanobacterial persistence. The mushroom-algae biogenerator/solar cell consisted of a spiral of algae on the cap (pileus) of the mushroom, overlaid with a graphene nanoribbon net to capture produced electricity. Both were applied using a 3D printer.

There were two important points demonstrated by this paper: 1) Cyanobacteria persist at significantly higher density on the live mushroom compared to a vinegar killed or silicone analogs, and 2) electricity can be captured and measured using this application method. While the amount of energy generated is tiny, this study provides a basis for the use of biological substrates for bioreactors. Using hyphal mats instead of fruiting bodies may be an interesting substrate to test for this application. 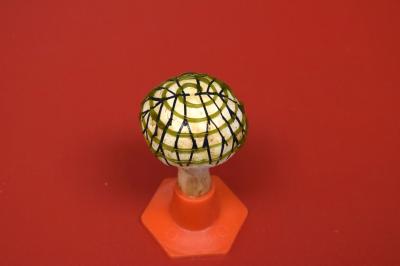 Figure 1. Mushroom which has been printed with cyanobacteria (green-brown spiral) and graphene nanoribbons (blck net).