Marasmius siccus is a small, saprobic basidiomycete mushroom which can be found growing in groups on leaf litter or on dead hardwoods. The species has a large geographical distribution and can essentially be found coast to coast in the United States.  This species can be distinguished from the similar Marasmius Pulcherripes by its orange color (fig. 1).  The cap appears distinct due to pleats running down the length of the cap. The stem is distinct compared to other mushrooms because the stem is very thin and composed of a hard tissue that isn’t malleable.  The gills and flesh below the cap are white; the gills attach to the stem. The color of the stem becomes lighter as the stem approaches the cap.  the edibility is unknown, but is known to have a bitter taste; the mushroom does not have any odor. 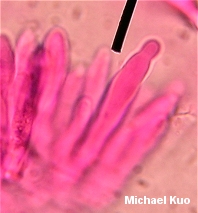