Research published in April of 2018 showed that the ancestor of  a fungus, Phycomyces blakesleeanus,  received a crucial gene for sensing gravity from ancient bacteria (Fig 1). Researchers determined that this fungus contains a single protein called OCTIN which is responsible for producing the unique crystal matrix in Phycomyces blakesleeanus. Next, this protein was traced back to a single gene. Researchers then searched for organisms with similar genes or proteins, which led to the determination that the gene may have been required from bacteria. In fungi, OCTIN is only present in Mucoromycotina, suggesting that the gene was acquired after this lineage diverged, the gene is also present in some oomycetes.

In the fungus, the crystals are localized in large spore containing cells where the dense crystalline structure falls through the cytoplasm towards the bottom of the cell. The localization of the crystals towards the bottom of the cell signals that the fungus should keep growing upwards (Fig. 2). This is crucial for the fungus to be able to disperse its spores into the air instead of downwards allowing for effective dispersal.  Although it has been believed that fungi must have a way to sense gravity in order to form effective fruiting bodies for spore dispersal; this was the first example of how a fungus achieves this task. One interesting remaining question is in  regards to a role for the OCTIN protein in bacteria which has never been shown. 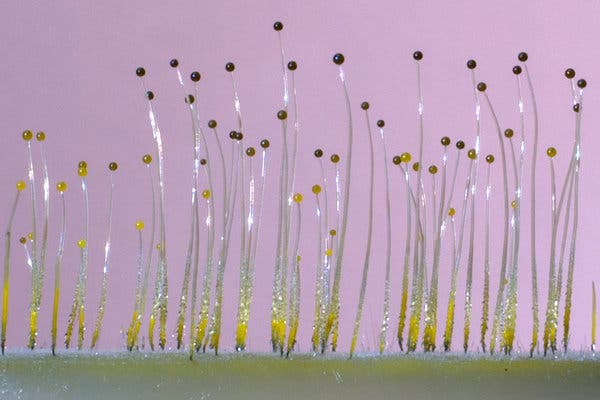