Cyathus Striatus is a saprobic basidiomycete that grows on decaying forest litter or on wood chips. It is widely distributed and can be commonly found in urban areas due to its ability to grow on wood chips. the species was first described by William Hudson in 1778 as Peziza striatus; it was moved to the genus Cyathus in 1801 by Persoon (2). It is commonly known as the Fluted bird’s nest fungus. It appears similar to and has the same habitat as Cyathus Stercoreus, but can be easily distinguished due to the presence of distinct lines or striations on the inner surface of the fruiting body (Fig. 1).  The fruiting body contains peridioles which give the fungus it’s common name, by making it appear as though the fruiting body is a nest containing eggs.  Before maturity, the “nest” of the fruiting body is covered by a white lid that later disappears, revealing the peridioles.

Fig 1: Group of Cyathus Striatus fruiting bodies appearing on wood chips in the MPS gardens. Striations visible in the cup.

The peridioles contain the spores in a hard sheath; the spores are smooth and elipsoid, the spores can be distinguished from the Cyathus Stercoreus because of a slightly different shape and a smaller size. Though in most temperate regions of the United States the macroscopic features are reliable enough to distinguish between the two. (Fig. 2). 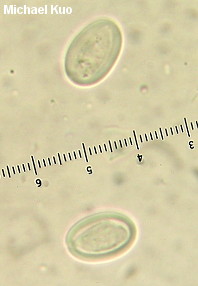